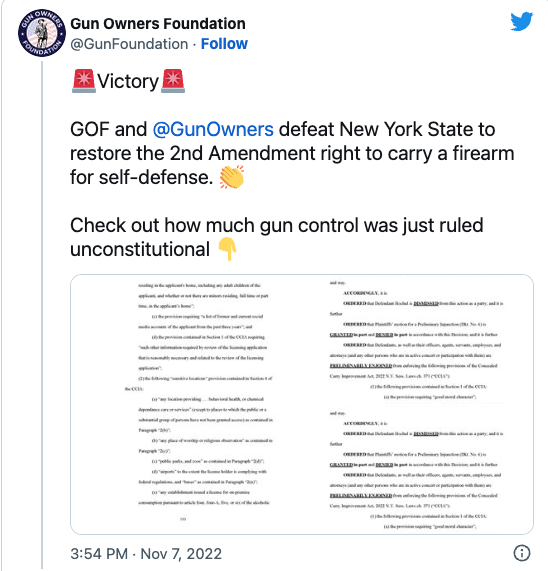 The new law created no gun zones which included theaters, bars, restaurants, parks, airports, and other public places such as Time Square. This win includes the suspension of the felony of having a gun on private property without express permission of the property owner via a posted sign. The injunction also suspended the requirement which forces people who are applying for concealed carry permits from handing over social media profiles to the state and proving that they have good moral character.  The gun rights organization argued that this was just a replacement for “proper cause” requirement that was rejected by the Supreme Court, and the judge agreed.

The state attempted to shift the burden of proof onto concealed carry applicants by forcing them to justify their “good moral character.”. But there was no established guideline for what is or is not good moral character. So this would serve to be problematic, as it would allow the state to approve or deny any application based on personal prejudice, rather than legal standards.

In his 182-page response, Judge Suddaby stated the new law has triggered “unprecedented constitutional violations.” And he ordered the state to halt enforcement of a large portion of the law at this time. This is to include the ban on carrying firearms at large gatherings where people are exercising their First amendment right to protest or assemble.

The win shows that GOF and GOA will fight against any infringement on the right to bear arms.  The groups are dedicated to protecting the God-given rights of all Americans from an overbearing government whether on the state or national level.

“Just like we warned politicians after the Bruen decision, fall in line, or we will force you to. We are excited to see Kathy Hochul finally served a plate of humble pie, and we are fully prepared to continue the fight should she again attempt to disarm the citizens of her state at a time when her party's policies are only escalating the danger that everyday citizens face.”

Sam Paredes, on behalf of the Board of Directors for the Gun Owners Foundation, added:

“This is very exciting for the citizens of New York, as today liberty won and tyranny lost. GOF and our allies remain fully prepared to defend this ruling from the foolish appeals that the anti-gunners in Albany will inevitably bring.”

GOA and GOF will continue to fight for a permanent injunction against the law. The two groups hope that other states will take notice of the victories in New York State by the two organizations and choose not to infringe on its citizens’ rights.