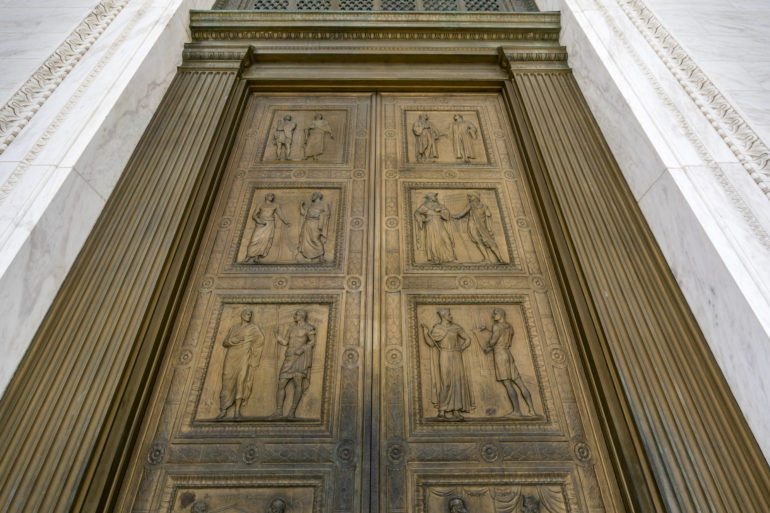 Yesterday, the U.S. Supreme Court heard oral argument in New York State Rifle & Pistol v. Bruen, a challenge to New York State’s discretionary concealed carry licensing scheme, which requires New Yorkers to demonstrate to the satisfaction of a government bureaucrat that they have some sort of special, individualized, good cause before being permitted to carry a firearm for self-defense.

Since Heller and McDonald were decided in 2008 and 2010, the only time that a Second Amendment case has been before the U.S. Supreme Court on the merits was two years ago in New York State Rifle & Pistol v. New York. Unfortunately, that case eventually was determined by the Court to be moot, after the city quickly moved to repeal its offending law, in a deliberate scheme to avoid a certain Supreme Court loss.

Justice Barrett’s addition to the Court, replacing Justice Ginsburg, has heightened the hopes of the gun community that the Supreme Court will bring the lower federal courts into line by finally requiring compliance with the Heller and McDonald decisions. We are optimistic that, with six Republican President-appointed justices, the Court will give gun owners a win in this case, but it’s entirely uncertain what any potential victory might look like.

Often, not much can be learned from oral argument, but a few observations should be made.

First, the over-arching issue continues to be how federal courts should decide Second Amendment challenges. The most reliable, pro-gun approach is using the “text and history” test that Justice Scalia used in Heller, which Justice Kavanaugh reframed as “text, history and tradition” in Heller II.

This textualist approach has been one of the consistent themes of Gun Owners Foundation’s litigation, now including almost 150 amicus briefs, as well as many other cases GOF is litigating.

Our persistent focus on the Second Amendment’s text is no surprise, as GOF was there at the birth of the Court’s approach in Heller, where our amicus brief urged the Court to decide cases according to what we called “text, context, and historic setting.” And that was what GOF argued once again in our amicus brief in this case.

Sadly, most federal courts never even look at the Second Amendment’s text, but instead jump headlong into a form of “interest balancing” such as strict or intermediate scrutiny. Indeed, gun rights-infringing states and cities inevitably argue for such a watered-down form of “interest balancing,” because it gives judges the power to decide which balancing test to use, and then how to apply it, thus teeing up gun control for an easy win.

Of course, “interest balancing” was the approach for which Justice Breyer unsuccessfully had advocated in dissent in Heller, but which the Court explicitly rejected.

In other words, “interest balancing” is the friend of activist judges who wish to ignore the text and undermine Second Amendment rights. As Justice Scalia stated in Heller, the Second Amendment is “the very product of an interest balancing by the people” and “the very enumeration of the right takes out of the hands of government — even the Third Branch of Government — the power to decide on a case-by-case basis whether the right is really worth insisting upon.”

At oral argument yesterday, the Solicitor General of New York urged the Court to defer to New York’s conclusion that its citizens generally cannot be entrusted with the right recognized in the Second Amendment. The citizens’ need for self-defense was given short shrift. Indeed, Justice Breyer echoed this palpable distrust of law-abiding gun owners, opining that “when you have a self-defense just for whatever you want to carry a concealed weapon, you go shooting it around and somebody gets killed.”

The New York SG urged that local officials should be given “discretion” to make the self-defense decision for gun owners based on an amorphic “facts and circumstances” type of approach, so long as government bureaucrats consider “factors” and give “reasons” for denying people their Second Amendment rights.

Thankfully, this argument garnered strong pushback by several Justices including, surprisingly, even Justice Kagan, who opined that the Court “would never really dream of … allow[ing] that level of local flexibility … for the First Amendment or other constitutional rights.”

Justice Thomas objected to the New York SG’s argument that the Second Amendment should mean different things in different places, based on population density, asking “how rural does the area have to be before your restrictions shouldn’t apply?”

What was shocking was that the Acting U.S. Solicitor General, arguing for the United States, seemed to take the position that the “text” of the Second Amendment somehow supports gun control laws. How is that exactly?

Certainly, one could argue that the English “history” or “tradition” support one position or another…but the text itself? How could the 27 words of the Second Amendment — which demands that “the right of the people to … bear Arms, shall not be infringed” — somehow support requiring government approval in order to carry a firearm?

We must now wait for the Court to issue its decision, at which point we may find out why the Court narrowed the issue that it granted for review — “Whether the state’s denial of petitioners’ applications for concealed-carry licenses for self-defense violated the Second Amendment.” We hope that the Court will address the unconstitutionality of government licenses generally, not just the denial of the applications filed by the particular appellants before the Court.

Indeed, Chief Justice Roberts questioned whether a person should be required to obtain a concealed carry permit at all, theorizing that “regardless of what the right is, it would be surprising to have it depend upon a permit system … the idea that you need a license to exercise the right, I think, is unusual in the context of the Bill of Rights.”

Truer words have never been spoken.

This article originally appeared on The Truth About Guns.